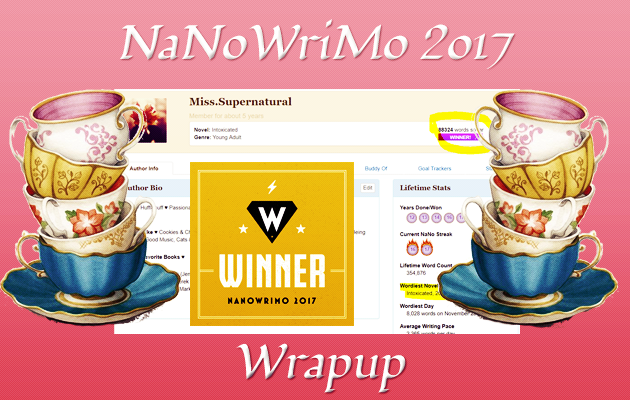 Hello fellow writers 🖋 NaNoWriMo has ended and the writing madness come to an end, which means returning to the “normal” life. It feels kind of weird not writing after 30 consecutive days of writing, but since I am so busy I have other things to do, which is not always for the best. Of course I had to do a wrapup for NaNo and talk a bit about how things went along for me. I also created a Twitter Moment with my tweets, if you are interested in checking it out!

I also quickly want to say that you are not a failure if you did not reach 50K for whatever reason: if you even thought about your WIP or wrote one word for it you made progress and therefore win! Not everyone can hit 50K, so whatever word count you have, it’s one step closer to finishing your novel. You are amazing no matter if you won in the end! What counts is taking time to work on your progress and doing something! I have also seen someone on my Twitter timeline who lost their entire work after almost making it and it broke my heart. Please always back up your novel twice or even thrice, because I cannot imagine how horrible it must be to lose everything you wrote in the last month, it’s truly very hard to cope with that. I always saved my writing on a USB Stick and sent it to myself via e-mail. After NaNo I have also saved it on a hard drive. It’s best to save it on different mediums in case one of them breaks.

Congrats to everyone who did make it to 50K, I am so proud of you all! I myself did make it and wrote 88324 words in total, which is a lot more than I ever would have expected. I planned to write a bit more than the target word count (1667) and settled for 2000 words per day, but especially on the weekends I wrote 3.000-4.000 words as I finally had time. I have to say that during the week when I was busy with university, I did not write as much as I had inspiration and motivation for, because I could only sit down and write in the evening. I usually am an afternoon writer (2-5 pm), so writing after 5pm is not the right time for me, but sometimes you cannot chose when you write. Whenever I wrote, I was a huge fan of the NaNo Word Sprints on Twitter, they literally motivated me so many times when I was not 100% feeling in the mood to write. My secret tip is to do as many wordsprints as you can! Overall, I was feeling very motivated for my project and that did not even lessen when things got more stressful. Writing felt so right this time, as I had finally found the right story for me. In the end I kind of broke a few of my own NaNo records that they now show in the profile. In the last three days of NaNoWriMo my ambitiousness was coming to the surface as I wanted to beat my “Wordiest Novel” record from 2012 (2012!writerme was wild and wrote over 3000 words each day) but I was likely not going to make it. In a moment of huge ambition my inner Slytherin awakened and I broke another record by writing 8000 words in a day, my all time record for most words written in a day. To be fair, I was able to take the whole day off to write, which is something not everyone can do. So in the end I broke the record I wanted to. Here are some of my stats!!!

I borrowed these questions from a past Beautiful Books Linkup. It’s hosted by Cait @ PaperFury and Sky @ furtherupfurtherin. This month’s questions aren’t up yet and that’s why I used these old questions!

1. On a scale of 1 (worst) to 10 (best), how did the book turn out? Did anything defy your expectations? 🖋 Hmm I would actually give my book a 7, which is surprising even me, as I would have never thought that I would like my own writing so much. I actually like this first draft more than I would have expected, which is a nice change. I felt like my writing got better – namely dialogue and description – and less crowded. Mostly, I felt very excited about what I was writing. There is lots of room for improvement though, because since this is not edited, lots can be done when I get to actually revising the draft. Let’s hope that I still like my book as much when I completely reread it after getting some distance.

2. Comparative title time: what published books, movies, or TV shows are like your book? 🖋 This was way harder than expected, because I did not completely find anything similar, so those are the closest guesses with a few common aspects (witches, opposing sides, intrigue) that I could come up with! I feel like for my other WIP’s I have way more comparative titles.

3. How do you go about editing? Give us an insight into your editing process. 🖋 I have no idea what I am doing when it comes to editing, so my goal is to actually educate myself a bit on how best to approach this. Susan Dennard gives excellent advice and I will be following her instructions. She has a great master list of resources on writing in general, including her worksheets on revising. This Friday she has also written a new newsletter (you should definitely subscribe to it!) all about a Guide to Revising. I feel like the way she does editing is compatible with me, so I will use her advice once I actually get to edit, so I don’t run around in a panic.

4. What aspect of your story needs the most work? 🖋  I feel like my writing needs lots of improvement, but it’s not as bas as things used to be back in May when I had just finished my first draft of the old idea (that I completely had to gut). Therefore, I would call this nearly finished first draft a success, even though I can identify some recurring problems for me as a writer.

5. What aspect of your story did you love the most? 🖋  Surprisingly much! I felt like I was finally writing the right story after so many failed attempts this year, which is why I was writing so much and was incredibly motivated to write every day. I wanted to explore my world and the characters so badly. This want has not lessened over the month, even as things got stressful!

6. What are your plans for this novel once you finish editing? More edits? Finding beta readers? Querying? Self-publishing? Hiding it in a dark hole forever? 🖋 Oh dear looking so far into the future is kind of dizzying, giving that I have not even finished the entire draft least of all got to editing. I’ll probably go with some more editing, until I can convince myself to let another human read this. I do not have a beta reader, but one of my friends said she wanted to read my draft, so I will force her to do so 😈 However, giving my WIP away to read will probably make me super anxious because it’s so hard to let someone else read and critique it. I’ve got no idea what to do afterwards apart from more editing, when I get feedback, but one person reading it is kind of not enough. However, in my immediate environment there are not more than a few people who would actually read my book because of either the genre or language I have written in.

7. Share a favourite snippet! 🖋 Not my favorite, but after writing so much I have no idea where the good paragraphs are hidden. Therefore, here is the first paragraph of my WIP instead! (I hope you guys like it, as it’s always quite scary to reveal your own writing) This – of course – is not edited at all, it’s literally what I came up with on November 1st! Interestingly I kind of like it, even though the opening needs polishing.

How did NaNoWriMo go for you? What are your writing plans for 2018? 🖋