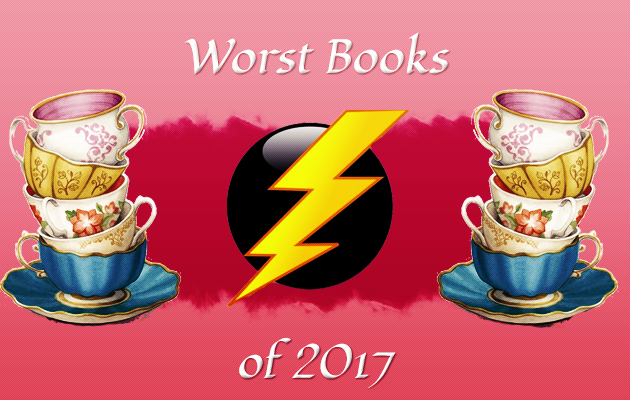 Hello fellow bookworms  ⚡️ I talked about my favorite books of the year two days ago, so now it’s time to the downside. I gladly had not many complete disappointments this year, as I have gotten better at detecting which books I’m likely to enjoy and waiting for Reviews on new books. Overall there are 10 books on this list, a pretty good number, considering I read 100+ books this year and the ones I disliked do not make up a large amount of that. Of course since I’m getting into books I truly hated, it’s time for a short disclaimer to remind you all that these are just books that I personally disliked this year. Just because your favorite book is on my list does not mean that you cannot like it or that this is a personal attack. With that out-of-the-way, let’s talk about the books (they are only sorted according to star rating and like with my best of’s include a link to the Review).

It Only Happens in the Movies (Holly Bourne) ⚡️ Biggest Disappointment ⚡️ Well this was a major disappointment with one of my most anticipated books by my favorite contemporary author. It’s by far the worst book I have read and I was super startled that this book was so unlike the 5 books I have enjoyed by this author. It got so bad that I had to DNF the book, as reading it was making me so unhappy and stressed out, that’s also why I have not been in the right head space to write the Review. Everything about this book was all wrong and horrible. There was no feminism and the focus on a romance that did not make sense at all. Worst of all the love interest was a sexist fuckboy that got away with every horrible, invasive thing he did. I have no idea how Holly Bourne could have written a book so opposed to everything she wrote before. This felt like a cruel joke.

Nick & Norah’s Infinite Playlist (Cohn & Levitan) ⚡️ Couldn’t find anything I liked ⚡️ This was a book I could not get behind at all. Between all the girl-on-girl hate, I didn’t find it in myself to like any characters or care about them. There was so much insta-love and references I didn’t get, that I was constantly shaking my head. It’s not wise to put lots of references into your book that most readers will not have a clue about – it’s just irritating and annoying. I regretted that I spontaneously picked it up from my local library to read for a Readathon, because clearly I did not put enough thought in this. I was bored, I was irritated and I have not a single thing I actually liked about this book apart from the fact that it was short and therefore soon over, even though it felt like it was never ending.

Beautiful Creatures (Garcia & Stohl) ⚡️ Long, tedious and infuriating ⚡️ Well this turned out to be a major disappointment for me. The unique world building could not make up for many cliché aspects of the book as well as the fact that many things made me uncomfortable (non-consensual touching, the love interest overstepping his boundaries 24/7). I sadly could not enjoy this at all and had to put it down. It’s seriously 500 pages long and I could not make it any further without throwing the book against a wall (which I would not do, as this was a library book). How thought that the idea of Ethan Wate and the romance was a good idea? There was so much potential here, but sadly not a lot of it was used. I cannot believe that there are 3 (?) more books with 500 pages about this, I have no idea what more there is to tell.

City of Lost Souls (Cassandra Clare) ⚡️ Just reading it to finish this Series ⚡️ I knew this was going to be a major let down and could not at all live up to the previous books in the Series. The plot was revolving around literally only one problem and felt pretty flat for a 500+ paged book. Nothing really happened and so many things were purely unrealistic, which is why this did not work for me at all. Clary was so clueless and making annoyingly naive choices, that made me roll my eyes all the time. Malec of course was sidelined for other ships, like I already expected. I cannot truly say that I am a fan of the books anymore, the author seriously should have stopped after the first three books, which were at least tolerable. I’d rather recommend The Infernal Devices Trilogy which I liked way better.

Prodigy (Marie Lu) ⚡️ The sequel blues strikes again ⚡️This sequel took the potential that I saw in Legend … and threw it down a set of stairs never to be seen again. That means that the sequel suddenly created an unnecessary love SQUARE and turned June even more entitled and privileged no longer acting according to logic on logic. My dislike for her unreflected decisions and treatment of Day rubbed me the wrong way so much these two became an instant NOTP even more than in the first book. I have no idea what happened here, because Legend was 3-stars enjoyable, but this was just all over the place. I hated what it did with the romance and the plotline. There still is nothing intriguing about the world we’re in to a point where the rivaling side is more interesting. I cannot say that I enjoyed this, especially as the end went downhill for me.

The Dazzling Heights (Katharine McGee) ⚡️ Bury your gays … again ⚡️ Excuse my salt, but it’s true. While The Dazzling Heights is set in a fascinating futuristic world with lots of intrigue and tension that I came to really enjoy, it continues to feature the very harmful Bury Your Gays trope, which is why I’m not willing to give the book a higher rating. It’s bad enough that the first book decided to kill off its only queer main character, but now we are doing it all over again. The lesbian does not even get a POV, appears a total of two times to make room for more unnecessary drama between all the remaining straight characters. It’s very clear that those character are favored and that there is not place for queer rep here. This book Series could have been great, but since it did not pay enough attention to its representation this is a solid no for me.

An Abundance of Katherines (John Green) ⚡️ How is this a John Green book? ⚡️ Well this is  my least favorite John Green book, because it didn’t hook me at all and left me feeling very underwhelmed. I disliked how slow and tedious the book was, as despite being so short it felt twice as long. It promises a road trip, but then stops at the first destination and spends the rest of the time here. The characters were strange, which was not making things better – I was really irritated with almost everyone in this book and felt no sympathy towards the main character. This is NOT a good book to start if you want to get into his books, because there are so many better ones. This did not have the John Green vibe that I normally appreciate and love, instead it felt pretty alien to me.

Rebel of the Sands (Alwyn Hamilton) ⚡️ Where is the sass I was promised? ⚡️ While Rebel of the Sands represented an interesting premise, it lacked in plotline and characters. The first half of the book took to long and was rather tedious to read while the main character was just another generic sassy heroine that did not manage to capture my attention. Compared to other heroines she does not manage to stay in memory or be remarkable. I was disappointed that Amani was not as sassy and great as I had been told. Not even the love interest stood out for me and the weird pacing did not help me to get invested in the story. Everything was predictable and since reading this it has come to my attention that the world building is problematic, as its Non-Western elements don’t seem to add up or make sense, instead being pretty stereotypical.

Even the Darkest Stars (Heather Fawcett) ⚡️ I hate obnoxious love interests ⚡️ I’m really sad about this book because it had a fantastic, unique world building and in theory a hooking premise. Sadly the execution severely lacked – the plot was not engaging and I could not feel myself caring for the story of the characters, which made reading the book more like a chore and less like enjoyment. I skim read lots of pages later, because I did not care about everyone. The protagonist felt utterly blank to me, as did the stereotypical ‘best friend that has always been in love with her’. Worst of all was the ‘broody bad boy’ love interest – River – who was cruel, mean and completely infuriating. He did not respect the protagonist at all, but she never called him out on his horrible behavior towards her, making me dislike him and the book greatly.

Before She Ignites (Jodi Meadows) ⚡️ I don’t get why we spent 80% of the time in a place where nothing happens ⚡️ I have to say it this book has fantastic world building and great potential, that however was not enough to make up for the slow, boring, not engaging plot and the secondary characters that lacked any depth. We spent 80% of the book in a prison – a very boring prison where nothing interesting happens and everything happens in a very predictable pattern. The author first tries to set up a mystery, that has been largely spoiled by the promotion itself and has created an irritating protagonist. I loved seeing mental illness represented in fantasy, but Mira is pretty spoiled and whines about having a pimple or not having a brush. Sorry, but I cannot relate. It also was never explained why everyone thought she was so special. I didn’t get it.