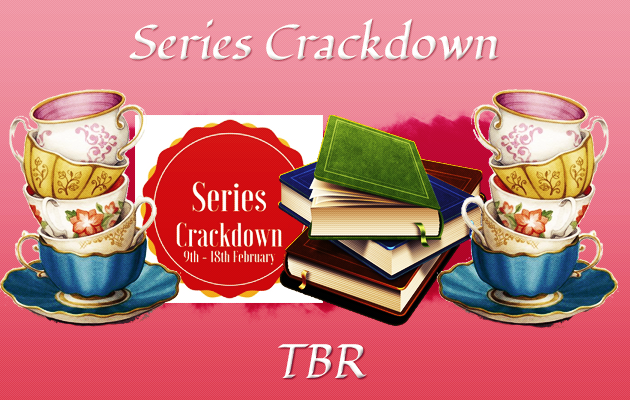 Hello fellow bookworms 📚 It was Saturday night and I spontaneously decided to participate in a February Readathon, because I do what I want and I was craving a challenge! At the time you’re reading this, I’m actually finished with my current semester of university so I have lots of time for reading and I want to read all the books!

Therefore, I decided to participate in the Series Crackdown, hosted and created by Mel @ thebookmoo! The Readathon is 10 days long and all about getting to that unfinished Series that have been sitting on your shelf for ages! The current round is running from February 9th to February 18th, so I’m pretty late with my post, but better late than never. There are going to be some fun sprints hosted at the Readathon Twitter as well as some Instagram challenges. I personally love that all the Sprints are hosted at 8pm GMT (9pm where I live), because I’m an evening reader and always have time, so I will hopefully be joining in with a lot of sprints 🙂

It has been six years since I started this Series. It’s finally time to reread the two (or three? see it has been so long I can’t really remember) books that I originally read and continue with the rest of the Series. The Shadow Falls Series used to be my fave all those years ago and I was so obsessed with the characters, it’s a shame I only now get around to finally finishing it. There’s even a completed spin-off now, that’s how long I waited! I’m keeping my fingers crossed that I still like the books as much as I used to, because everything else would be pretty sad. With that being sad, these 5 books will be my focus for the Readathon and I’m determined to finish them!

I don’t think I will get to them, but you never know. Maybe I’m just an overachiever who cannot get enough (I mean 10 days and 5 books means a book every second day and here I am making more plans), but I need to motivate myself to read those two books (especially Shadow and Bone, you have permission to scream at me  to finally read it). I likely won’t get to them during the Readathon, but there is always time afterwards!

Are you participating in the Readathon? Which Series do you definitely need to get to? 📚