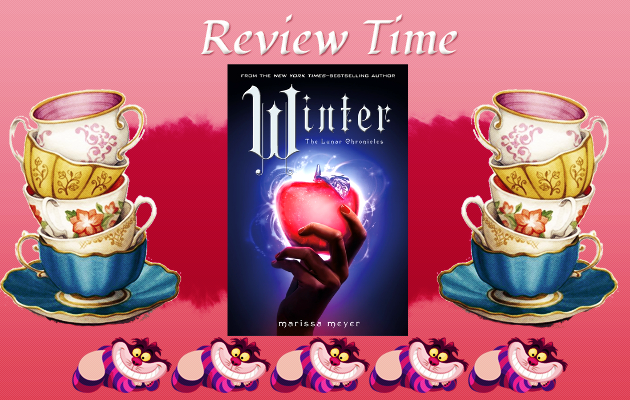 Princess Winter is admired by the Lunar people for her grace and kindness, and despite the scars that mark her face, her beauty is said to be even more breathtaking than that of her stepmother, Queen Levana.

Winter despises her stepmother, and knows Levana won’t approve of her feelings for her childhood friend–the handsome palace guard, Jacin. But Winter isn’t as weak as Levana believes her to be and she’s been undermining her stepmother’s wishes for years. Together with the cyborg mechanic, Cinder, and her allies, Winter might even have the power to launch a revolution and win a war that’s been raging for far too long.

Can Cinder, Scarlet, Cress, and Winter defeat Levana and find their happily ever afters? Fans will not want to miss this thrilling conclusion to Marissa Meyer’s national bestselling Lunar Chronicles series.

“Yeah, but broken isn’t the same as unfixable.”

Well it has been a while since I read this book, but as I’ve been on a hiatus I’m only now catching up on all the Reviews I want to write 😄 That being said, I really loved the conclusion to the Lunar Chronicles! It was very painful, because all. the. ships. suffering, but I can say that I liked how things ended up being. Winter sure is a tome with its 800ish pages and will likely remain the longest book I read this year, but despite the size I liked how the plotline was moving along. At the beginning, I had some time getting into the book, but when I finally did, it was really easy to keep reading!

My children Scarlet and Wolf were breaking my heart 💔 WHY IS MY OTP SUFFERING? How allowed this? When I read the book (ha! I now have at least some perspective) I was a bit angry and felt like Scarlet and Wolf had to suffer the most out of all couples, at least in my opinion. They were constantly kept apart and while that’s true for all couples, I felt like they had the hardest way and a very long while without any pagetime together. I will put the rest under the spoiler Tag as it revolves around the plot a bit, but their suffering just reinforced that they are indeed my favorite of the couples, as Scarlet and Wolf just have the capacity to break my heart and get me all emotional.

Kai & Thorne’s budding was hilarious 💕 This was everything I had no idea I wanted omg –  let them be friends, this is great! The scene where Kai pardoned him stole my heart, because yes forgive him but also hold him accountable – plus the banter between them was great. Kai totally ships him and Cress though and Thorne’s nicknames for Kai are hilarious! I feel like their relationship is super underappreciated. I’m so sad the Series is over now 😢

“I fear tomorrow will be even more difficult for you, Sir Clay. Do try to think of me when you can.”
“Try, Princess?” He smirked, meeting her gaze again. “I can’t seem to think of much else.”

Winter and Jacin were a very cute couple 💖 I don’t usually like childhood to lovers, but the PRINCESS AND HER GUARD trope!! Jacin loves no one but his princess and his devotion is so cute, he risked everything to go back to Luna and see her again even punishment and possible execution. He tries so hard to pretend that he’s only a friend to Winter and is good at holding back his feelings, but he loves her and as we’ve seen would do anything to keep her safe, because she’s his everything. Furthermore, Jacin helps her through her hallucinations and never calls her any slurs. He is careful not to touch her at other times … but like Winter sure wants him too. Winter herself adores him and can never shut up about him. She’s a very good at teasing him out of his guard mode, this was my fave. Pretending that there was an assassin under her bed only to get him inside, going into the hall when he refused and leaning against him … the tension between them omg. The end … wasn’t as happy as I had wanted to, but I really hope that somehow things are going to get better!

I loved Winter a lot as a new character 💞 She’s a very nice cinnamon roll who you have to like, because she is not as cruel and mean as the other Lunar’s. Instead Winter is a genuinely good person, she is just trying her best, she very soft-hearted and always ready to help others on her planet. She is also incredibly charismatic and smarter than most give her credit for. Winter just wants to make some friends and show kindness to the fellow Lunar citizens. It’s horrible how she has to be in Levanas clutches, the woman who forced her to cut open her face and continues to let her witness gruesome executions to upset her … also that creep Aimery omg he was so disgusting, trying to make a move on her and force her to be with him ew. Because Winter doesn’t use her Lunar gift she is plagued by horrible hallucinations and it hurt to see her suffer so much and be called slurs by everyone else, only few truly accepted her.

Seeing the other characters again was really great as well 💓

“They’re the first crew I’ve ever had and most of them even call me Captain. I’m going to miss them.”

The Winter + Scarlet friendship was mostly great (IF NOT FOR THE HEAVY ABLEISM) 💘 Scarlet hates her in the beginning, as she is kept as a ‘pet’ for Winter and obviously doesn’t trust any Lunars. Instead of being cruel, Winter is kind to her but cannot do much else without Levana going off and maybe killing Scarlet. After a while they become unlikely friends when they have to work together. Scarlet kind of grew fond of her and was so worried when she though Jacin had hurt her. BUT WHY THE ABLEISM??? Scarlet constantly calls her slurs and rolls her eyes at Winter’s fragile mental health. Later she uses them as endearments, but I don’t find that cute or funny. Why  did Scarlet not stop with her ableist remarks when they became friends? That really bothered me about their relationships.

I loved how we saw Cress + other characters interact more 💗 To Wolf  she’s now like his little sister and she helps him keep an eye on Scarlet’s farm and tries to get him to take care of himself. Their relationship is so pure and adorable it warmed my heart! When it comes to Jacin, she is very afraid of him at first and not at all happy, because Jacin is not exactly kind and cuddly. But he later grows fond of her (don’t tell me otherwise!!) and protects her, yeees! Furthermore, I loved her budding friendship with Iko like them playing against each other and Iko being affronted that Cress could actually beat her, she is just a great friend!

Of course  I truly enjoyed all the other romances ❤️

“In fact,” Cinder continued, “my understanding is that, under Kai—Emperor Kai—Kaito?” She raised her eyebrows at him, realizing this was the first time she’d ever been expected to be formal in his presence.

In response, Kai looked like he wanted to laugh. She glared at him.”

Kai & Cinder are of course super adorable. I really need them to marry each other and be a badass power couple! Kai also finally apologizes for book 1 and totally accepts her now, it was so beautiful to see two people so accepting and respectful with each other. They are so soft around each other and still a contrast (the diplomat and the mechanic), which is why they work so well together. I laughed at Kai writing most of Cinder’s speech, my smart boy! Also the end … when she’s not sure how to address him, it was so hilarious, especially as Kai kept grinning at her! I’m very glad how their relationship ended up!

“Thorne glared at him. “Whatever, Doctor. It’s just, when Cress thought she was in love with me, she was actually in love with this other guy she’d made up in her head, who was brave and selfless and stuff. I mean, he was a real catch, so who could blame her? Even I liked that guy. I kind of wish I was that guy.” He shrugged.

Thorne & Cress still have not admitted each others feelings in the beginning. Thorne is so clueless for not seeing her attraction and I will always scream that he’s better than he claims to be! When Cress was in danger he was devastated and basically ripped her message from Cinder’s hand. Captain you have been exposed. In the end things finally started happening between them and overall I liked their slow burn relationship, was it felt realistic given to how both their characters were. It broke my heart how Thorne thinks that he doesn’t deserve her, but I appreciate how he tries his best to be the person she sees in him!

IN CONCLUSION: Winter was a good conclusion to the Lunar Chronicles. I was very emotional and suffering with the characters, as everyone kept getting hurt. My emotional investment is just so great and it was what made the Series so great for me. I liked how things turned out to be in the end and I’m sad that my time with this characters is now (mostly) over!

Have you read Winter? Who is your favorite character?