Hello fellow bookworms 😈 It’s time for another Top Five Wednesday, which is a weekly meme which was created by Lainey and is now hosted by Sam! This week’s topic is Favorite Villains so perfect for the approaching Halloween! Again, Sam encourages us to not only choose villains from Harry Potter – that shouldn’t be a problem for me as I have a lot of other villains that I want to talk about today 😄

Why I love Villains 😈

I love villains a lot, something about the dark and mysterious antagonists is always intriguing to me and ever has been. I love soft cinnamon roll characters, but also those dark characters that are full of hatred, bitterness and sin.

For me the villains that most appeal to me and that are likely to land on the favorites list are those that are complex and charming in their own right. I love nothing more than a villain who is charismatic, charming, strangely alluring even though they do terrible things. In fact the villains that you just love to hate are the best in my opinion, because you can root for them despite their horrible actions. What’s most important here is that the villain has a motive, a solid reason for why the take the actions, why they try to achieve such an evil goal. There’s nothing worse than a bad guy who does things just because he is so ‘evil’. There’s nothing better like a villain who thinks he is doing right for some reason and that he is the hero of his story. Just like our hero, the villain needs to have a solid background story, that explains why he became the antagonists and what he chooses to gain by opposing the protagonist! I often don’t really care about the villains that are just ‘pure evil’ and have no redeeming traits.

“Miracles are statistical improbabilities. And fate is an illusion humanity uses to comfort itself in the dark. There are no absolutes in life, save death.”

AIDAN is the only character on this list who is not remotely human, as it’s an artificial intelligence program! The thing with AIDAN is that it’s a bit faulty after the attack that sets off the course of the story resulting in it acting more human and generally not like it should. I will not say too much, but the reason why I featured it here, is that AIDAN can definitely be considered and antagonist and villain, especially in the first book. Its sole purpose is to protect the ship it was installed on, but the thing is that AIDAN takes a lot of drastic measures to ensure this, meaning a lot of mass murder. It always feels justified in doing though, claiming that it was necessary and something humans knew needed to happen, but they didn’t have the will to actually make the hard choices. Despite being a dangerous killing machine, I couldn’t help but love AIDAN, it’s a fascinating character to read about, especially as it’s so eerily human at times, you almost forget it’s a program that shouldn’t have feelings and definitely does not have a conscience.

2. The Darkling (The Grisha Trilogy) 😈

“The Darkling slumped back in his chair. “Fine,” he said with a weary shrug. “Make me your villain.”

He’s probably my favorite villain not going to lie. I’ve full-on fallen down the deep hole that is the Darkling obsession. I love him so so so much, because I love dark, snarky, mysterious characters, he gets bonus points for being a great villain! The Darkling is such an interesting character, he’s flawed, bad and still sometimes surprisingly gentle and moments he slips up and shows someone different. I definitely don’t agree with what he does of course, but I knew that he would be a villain going in, so I never expected him to be a good guy. I’m definitely trash for him like I predicted because I love a good villain. The “Every villain is a hero in his own mind” 100% applies to him, I think he genuinely thinks he has to do what he does to ensure peace, even though it’s a twisted logic, but that makes him so much more interesting as a villain. I can understand his motivations, even though I don’t agree with his methods.

Yes hello I LOVE Holland! It’s a written law that I have to find that one character that is snarky and has a tragic past and adopt them – it literally happens every time. So apart from being my poor sinnamon roll, Holland is the second Antari in the Series and bound to these evil people who enslaved him. All these years have made him bitter and trained at not showing emotion – I just want him to be happy, he did not deserve that. My boy Holland is really clever and incredibly powerful, which makes him a very dangerous enemy, especially as he doesn’t have any problems with hurting others to achieve his goals. However, I feel like there is more to him than being ruthless, he’s not as bad as everyone thinks. He’s definitely an antagonist in the first book, but as I have not read beyond that >I cannot say where his character development might take him. My bets are on becoming even more of a villain (the main villain of the series) as time goes on, but I’ll have to see! I’m actually planning on reading the sequels soon. 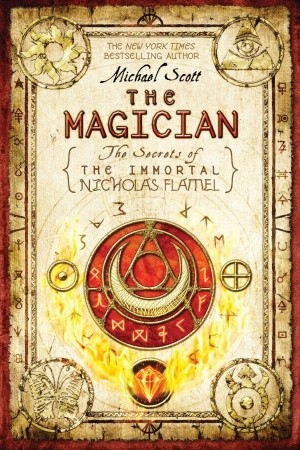 “If you have to injure someone, then make it so severe that his vengeance need not be feared.”

I almost never talk about this Series, even though I had such a great time reading the first 4 books, so here we go! When Machiavelli was introduced in the second book of the Series, I instantly liked him and he’s probably one of my favorite characters of the whole series, because he’s so interesting. On the one side he’s manipulating and ruthless, having survived hundreds of years of intrigue of royal courts and dangers of superiors by sheer diplomacy and manipulation of words. Machiavelli is a master of getting what he wants and using words to his advantage. On the other side he’s also not as cold and bloody like other antagonists in the Series, instead he’s shown to be warm as well, especially towards the hero and that alone makes him seem so human. In the end of The Necromancer it’s also shown that he might have some incredible character development if I interpreted the hint the right way.

“His smile is laced with dynamite. “Go to sleep”
“Go to hell.”
He works his jaw. Walks to the door. “I’m working on it.”

It has been a while since I read the books, but I will reread them solely for Warner (+ Juliette & their relationship), because I really like him as a character. He’s a very good villain, controlling, manipulative and a liar – the best thing is that he’s openly admitting to being all of the above and very straightforward about his intentions. That’s why I liked him so much, because you know that he’s not good person and he doesn’t pretend to be one either. He also had great complexity to his character and I liked his interactions with Juliette, because she was standing up to Warner and making fire under his ass. Later on he undergoes a lot more character development in the good direction and that makes him even more interesting. I have not read the newest addition Restore Me yet, so I cannot speak about this book, but I like where he was headed in the original trilogy!

“I am tired of being used, hurt, and cast aside. It is my turn to use. My turn to hurt.”

What I loved most about Adelina, is that she is a villain protagonist and follows a negative change Arc throughout most of the Series! She has this darkness inside her that controls her more than she wants to and I loved that she was also having these dark thoughts. Again, this was different as she actually relished other people’s terror and fear and kept turning bitter at times. I did relate to Adelina feeling like there was only “kindness with strings attached” meaning that people tend to be nice to you, when they need something from you, which is a fact that many will be able to relate to. In the end, I really felt Adelina’s isolation and her feeling alone, cut off and again abandoned. Later in the Series her darkness gets even worse. You can see how she slowly succumbs to her own darkness and lets it fuel her. She’s now finally fighting back, lashing out against everyone who hurt her.

What are your favorite villains from books or TV? 😈

14 thoughts on “Why I love Villains feat. Favorites”