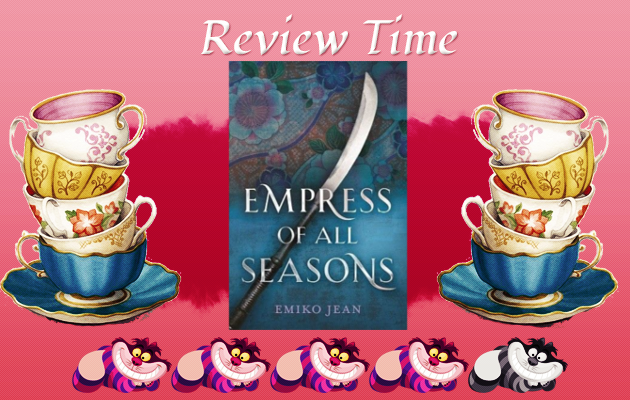 In a palace of illusions, nothing is what it seems.

Each generation, a competition is held to find the next empress of Honoku. The rules are simple. Survive the palace’s enchanted seasonal rooms. Conquer Winter, Spring, Summer, and Fall. Marry the prince. All are eligible to compete—all except yōkai, supernatural monsters and spirits whom the human emperor is determined to enslave and destroy.

Mari has spent a lifetime training to become empress. Winning should be easy. And it would be, if she weren’t hiding a dangerous secret. Mari is a yōkai with the ability to transform into a terrifying monster. If discovered, her life will be forfeit. As she struggles to keep her true identity hidden, Mari’s fate collides with that of Taro, the prince who has no desire to inherit the imperial throne, and Akira, a half-human, half-yōkai outcast.

Torn between duty and love, loyalty and betrayal, vengeance and forgiveness, the choices of Mari, Taro, and Akira will decide the fate of Honoku in this beautifully written, edge-of-your-seat YA fantasy.

Thank you to HMH Books and Netgalley for providing me with a digital Arc in exchange for an honest Review!

“At one point, she’d thought (spoiler) completed her. Now she realized that he didn’t. She was complete by herself. Marriage and love, they aren’t achievements.”

🌷 I really came to love all the characters. We get a lot of insight into them and all of them had their flaws and vulnerabilities. Mari is a yokai Animal wife who has never fit in, as she’s not as pretty as the other women of her tribe and especially her mother is incredibly hard on her. However, she has been trained in weapons instead and now plans to secure the position of empress for them, even though yokai are forbidden from participating in the competition. I liked seeing her struggles and how strong she was becoming. Taro is even more flawed, he is not the man his father wanted him to be – he likes to build things and is considered too emotional. He might seem like he’s better than his yokai hating father, but there’s a difference between having good intentions and carrying out. His character got especially interesting the end of the book! Akira also really grew on me as well. He was such a loyal friend, struggling a lot with his self-worth, something I could easily relate to. The Son of Nightmares never had the best life and still is not as in control, as his title would suggest. He sets out to prove himself worthy and finds himself there!

🌷 The relationships were very well handled. There was a bit of a love triangle, but this was one of the rare times it was actually done well, because it’s not the focus of the story at all and doesn’t revolve around any drama, jealous or the main character having to choose. Mari is very clear on her feelings and we certainly know that she does not have feelings for her childhood friends like he’d want to. They are both still close and share a special bond, just not romantic. It’s true that Akira wants to prove he’s worth of her, but he doesn’t get magically paired up with someone else, but instead learns to recognize his own self-worth and find something to fight for. Mari and Taro’s relationship was very interesting indeed, but also incredibly flawed due to their different natures, meaning it changed quite a lot, but was also realistic as they did not know the other as well after all. The only thing that bothered me was the insta-love between the two of them, as it was so unrealistic. Taro literally changes his entire plans when he randomly meets Mari, which made no sense. His convictions run so deep it should have taken something huge to change his goals, so his sudden change of mind had no strong reason.

🌷 The worldbuilding was so interesting and refreshing. I really liked how the world was set up and there was so much hidden potential that I think would have made for a fantastic Series, as we have all these characters and abilities! I especially wanted to see even more of the yokai, the ‘monsters’ with their special gifts that are hunted and enslaved by the human society. The book mentioned a lot of the different races, but there were so many mentions that I really would have loved to see a sequel and get to know all of the yokai more in-depth. I definitely liked them as a concept and felt with their struggles of either having to stay hidden or being treated like slaves and bound their entire lives. The world is rich with conflict as there is lots of hatred for those who are different and we see first hand how that can look like. Another thing I liked was of course the Season competition with all the girls trying to conquer the four seasons to win the hand of the prince. That’s what initially drew me in, as I really liked seeing that battle, as it was very tough. It was also portrayed with a healthy dose of realism as a lot of girls died.

🌷 The plotline overall was … intense and pretty wild to be honest. I didn’t have any issue with the beginning of the book being more character-driven and slow-paced, as it set up all the characters and their stakes, making me get to know them and care about their lives. Towards the end the plot definitely got more suspenseful and had me on the edge of my seat, as I had no idea how things would end, it really could have gone either way and that added to the finale of the book being very well done! There was a healthy mix between the Seasons competition and the brewing rebellion of the yokai against their human slavers! My only complaint here is that this book had SO much potential for a sequel, but then wrapped up the entire possible plot for another book in a couple of pages. Oftentimes we wish for Series  to end sooner, but this one was a book that DEFINITELY should have gotten sequel, maybe even been a Trilogy! I saw so much potential and I’m a bit sad that all of it got squashed at the end, as the ending felt very much rushed and hurried with so much telling instead of actually giving us more time to explore the rebellion.

IN CONCLUSION: Empress of All Seasons was a fresh, unique fantasy book with many lovable, but flawed characters that I found deeply fascinating and interesting. The world was lush and just what I wanted to read about, dealing with enslavement and what happens when hatred runs free. There are lots of things I appreciated about the book and it had all the potential for a sequel, but sadly that was cut short at the end.

Have you read Empress of All Seasons? What is your favorite fantasy book? 🌷

15 thoughts on “Arc Review: Empress of All Seasons by Emiko Jean”