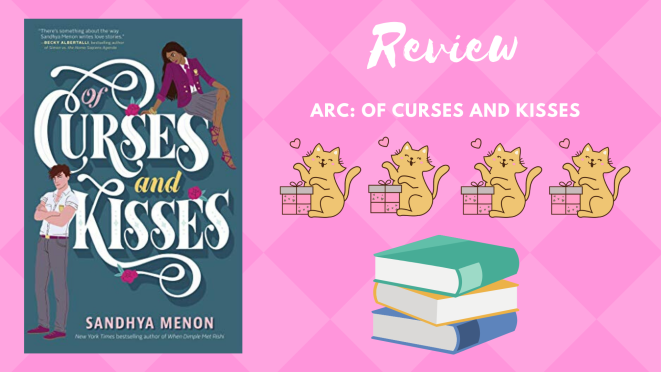 Will the princess save the beast?

For Princess Jaya Rao, nothing is more important than family. When the loathsome Emerson clan steps up their centuries-old feud to target Jaya’s little sister, nothing will keep Jaya from exacting her revenge. Then Jaya finds out she’ll be attending the same elite boarding school as Grey Emerson, and it feels like the opportunity of a lifetime. She knows what she must do: Make Grey fall in love with her and break his heart. But much to Jaya’s annoyance, Grey’s brooding demeanor, and lupine blue eyes have drawn her in. There’s simply no way she and her sworn enemy could find their fairy-tale ending…right?

His Lordship Grey Emerson is a misanthrope. Thanks to an ancient curse by a Rao matriarch, Grey knows he’s doomed once he turns eighteen. Sequestered away in the mountains at St. Rosetta’s International Academy, he’s lived an isolated existence—until Jaya Rao bursts into his life, but he can’t shake the feeling that she’s hiding something. Something that might just have to do with the rose-shaped ruby pendant around her neck…

As the stars conspire to keep them apart, Jaya and Grey grapple with questions of love, loyalty, and whether it’s possible to write your own happy ending.

Thank you to Simon Pulse and Netgalley for providing me with a digital Arc in exchange for an honest review! All pictures are taken from the Arc and therefore subject to changes.

I’m happy to report that Of Curses and Kisses was a great success for me and made me incredibly excited for the other retellings (focusing on a different couple) in the series 🥰 This book solidifies my love for Sandhya Menon’s writing and storytelling, that has stolen my heart with her Dimple and Rishi Series before! This time, there’s even a slightly magical twist (at least in this first book) to the contemporary story that was subtle and so well done. From the amazing characters to the slow burn enemies to lovers romance and the great supporting cast Of Curses and Kisses has it all to be a lovely book 💗

Enter: Jaya Rao, Princess & Book Lover 🌹 Raised as the oldest child in the Dao Dynasty that still holds a lot of power in India, Jaya has always been taught to be dutiful and do what’s best for her family. This showed in her fierceness to protect her little sister and sacrifice her own happiness to keep her family safe. The show of dedication really warmed me to Jaya even though she could sometimes also be a bit too traditional and overprotective when it came to her little sister Isha, who is her exact opposite: carefree and not caring much for rules. What I loved about Jaya was that she came across as very realistic: she’s got her flaws but is still trying her best to protect her loves ones and tries to be a good friend. There’s a lot of expectation on her to always be diplomatic and flawless, as well as follow the plan that has been laid out for her. However, her fierceness, cynic inner comments, and dedication also show that there’s a lot of passion simmering under the surface. I personally loved that Jaya came to realize how she wanted her life to look like and how to reconcile the expectations of her culture and parents with her own happiness and independence.

Enter: Grey Emmerson, Beast & Unhappy Heir 🌹 The second main character, Grey is the heir to the British Emmerson Dynasty that has always been feuding with the Rao’s. Unlike what you’d expect Grey is not the spoiled, arrogant heir who has everything. Instead, he’s been cast off by his grieving father after his mother died in childhood and since believes to be under a curse that the Rao family issues long ago. As a result of being told constantly by his father that he’s damaged, dangerous and better off isolated from everyone else, Grey has shut himself off from the world. He pushed the people trying to be his friends away, is stoic and believes he deserves his fate. His self-hatred and loneliness really made my heartache. I understood why he’d hidden away and it made me so angry at his father for manipulating him into thinking he wasn’t worthy of love and that there was something wrong with him that made everyone leave. Throughout the story, however, he slowly comes to realize that there could be a different way for him.

A Tale as Old as Time … 🌹 Of course, I was here for the main romantic relationship between Grey and Jaya, as part of the Beauty and the Beast retelling. It’s enemies to lovers and an incredibly slow burn romance! However, I liked it that way as the angst of all the worries and secrets they each kept made it only sweeter to see how they both grew to like the other despite their families hatred for each other. Jaya initially sets out to punish Grey for a scandal she belives of his own making, but as she gets closer, she realizes that he’s not what she expected and much more lonely than everyone she’s meet. Grey himself is suspicious and tries to hide his heart, for fear of getting rejected like all his life. Yet they both can be honest with each other and despite the secrets they have, I liked that there was a lot of communication and many scenes with deep, emotional talks that had the characters come to a realization about themselves. Their romance is hard-earned and it swept me off my feet as you can see how well Jaya and Grey fit together, despite the odds 💕 Not going to say more, but I liked how the curse played out in the end and how there was a slightly magical twist, in the way that you never knew if it was real or not. All in all, the retelling was very creative and imaginative!

The Amazing Supporting Cast had me hungry for more 🌹 I am so happy that we’re getting more books set at St. Rosetta’s Academy because I loved all the secondary characters and wanted to see much more of them. We have Isha – Jaya’s little sister – who was caught up in a scandal, but is still carefree and defying the expectations set for her. She loves robotics and wants to break free of the stereotypes set on her. I loved the messy sisterly bond between her and Jaya, especially because it felt so real to me. Jaya could be controlling at the beginning of the book and judged her sister very harshly, as she was always attuned to tradition, even though deep down she knows that it’s not right. As Jaya coms to realize that she loves her sister for who she is and that she doesn’t want to be constantly telling her what to do, both sisters got even closer and Isha is ready to make her see that Jaya deserves her own happiness.

Then there are Grey’s ‘friends’ aka the people who want to connect to hi,m, but sadly get pushed away by him a lot. Daphne Elizabeth is caught up in a bad relationship that messes her up and despite knowing that what she did wasn’t okay, I really felt for her, as the guy clearly was playing both girls. DE (her nickname) is aware that she messed up and I like that the story handled the cheating with nuance, not making her seem like a monster for it, but highlighting that it wasn’t okay. Jaya telling her friend that she deserved love and to be her own person was really warming my heart, I loved the bond the two of them developed. Then there’s chaotic Leo who’s a bit adorkable against his will, but has a good heart and has always tried hard to connect with Grey, as he sees that he’s a good guy. Not too far off is Rahul, a genius nd huge nerd, who’s not only incredibly clever but also very dorky and shy. I really hope we see more of him in future books, as he was such an interesting character! Last but not least, there’s Catrina, who’s one of the antagonists, but very well written one. At first, I feared that she would be the stereotypical ‘mean girl’ but you can see how lonely she is, as her friends are more like transactions and not there for her emotionally. Her relationship with Jaya is messy, but you can understand why she’s reacting so harshly, as Catarina is set on appearing strong and in control.

“What he did know was that she’d taught him, with her steady kindness, with her unfailing warmth, that he wasn’t what his father believed he was. What Grey had come to believe he was too. […] She’d shown him he was capable of more, that he had so much uncovered promise within him. And, weirdly enough, he’d begun to believe her.”

Are you going to read Of Curses and Kisses? What is your favorite Beauty and the Beast retelling? 🌹

5 thoughts on “Arc Review: Of Curses and Kisses by Sandhya Menon 🌹 A great Beauty & the Beast Retelling”