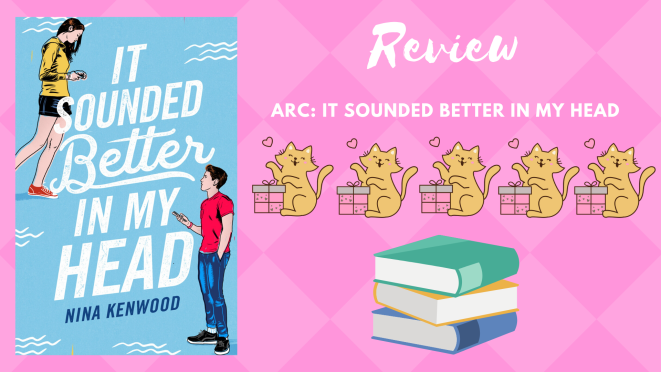 Representation 🌷 MC with Anxiety (+ past Acne), Bisexual Side Character

From debut author Nina Kenwood comes a tender, funny, and compulsively readable novel about first love and its confusions, and all of the awkwardness of teen romance.

When her parents announce their impending divorce, Natalie can’t understand why no one is fighting, or at least mildly upset. Then Zach and Lucy, her two best friends, hook up, leaving her feeling slightly miffed and decidedly awkward. She’d always imagined she would end up with Zach one day―in the version of her life that played out like a TV show, with just the right amount of banter, pining, and meaningful looks. Now everything has changed, and nothing is quite making sense. Until an unexpected romance comes along and shakes things up even further.

It Sounded Better in My Head is a compulsively readable love letter to teenage romance in all of its awkward glory, perfect for fans To All the Boys I’ve Loved Before and Emergency Contact.

Thank you to Flatiron Books and Netgalley for providing me with a digital Arc in exchange for an honest review! All quotes featured are from the Arc and therefore subject to changes.

“I am an adult now (sort of, kind of, not really).” – The title of my autobiography.

This book really came for me personally. It unearthed some of my deepest thoughts and worries and I was like how??? did you see into my mind??? Some of the things were so accurate it was scary. The main character is basically me if I was more of a Slytherin. In general, the book was a comfort and made me feel so understood. Coupled with a swoony romance, friendships and a fast-paced, easy to read writing style It Sounded Better in my Head slowly crept into my heart and surprised me by becoming an instant favorite and absolute must-read for everyone who loves an awkward, relatable main character being confronted with stepping out of their comfort zone. In a way, this book really reminded me of Fangirl by Rainbow Rowell and Queens of Geek by Jen Wilde, two of my all-time favorite books about anxiety, friendship and lots of nerdiness 🥰

“They want to be something. They’ll have real jobs. And money. I don’t know what I want to be. I mostly trained myself to do well at school as an antidote to all the dark thoughts, the ones that said ‘no one likes you very much’ and ‘you have nothing to show for your life except schoolwork’.”

I related to the main character Natalie SO SO MUCH! ➽ Sometimes it felt like we were almost the same person, there were so many little details and thoughts that seemed to be plucked right from my head and it honestly blew my mind. Like me, Natalie struggles a lot with opening up and being intimate with someone (safe for a few friends that she trists), as she’s not really good with people and often prefers to spend her time alone in her comfort zone. The way that she would stay home all weekend and read, as well as be super awkward in conversations resonated with me so much. I felt Natalie’s apprehension of leaving her comfort zone and the fact that she wasn’t one for parties, felt super uncomfortable around new people as well as all the overthinking. I definitely see her as socially anxious like myself as we had a lot of the same experience that made me feel so seen. Unlike me, Natalie struggled with severe acne in her early teens and I really appreciated that the book gave us an insight into the topic and how it affected her mentally, as I hadn’t seen that before. A lot of the anxiety that Natalie has now stems from her experience with severe acne and how it made her so uncomfortable in her bully and the suspect of nasty comments and bullying. This got to the point where she felt ashamed of her body and was obsessing over her experience and how to cover her face. It was a long and painful process for her to find medication that helped her in the long run, yet left her with scars, both physically and emotionally. That’s why she hates standing out and is always afraid of letting anyone close in the fear that she will be rejected.

Another thing I appreciated about Natalie was how her fears sometimes made her self-sabotage her relationships. It could be frustrating to read about, but I got it because the deep fear of rejection made her push others away. Then there’s also the fact that her neat world seemed to fall apart when her parents decide to get a divorce. some of the fights Natalie has with her parents felt so real: they were messy and included both sides saying hurtful things in the heat of the moment, even though they loved each other. She also feels stuck in limbo as the book is set between graduation and college, a time I know is weird as the future is still a bit uncertain and like myself, Natalie didn’t have this one big plan and career that she wanted to pursue, unlike her friends. She signed up for things that sounded interesting, yet mostly craved the security of academic learning and not yet having to commit to anything. To sum it up: Natalie was so much like me, safe the fact that she’s a self-declared Slytherin 🐍

“‘I feel very reassured. In fact, it feels like we’re in separate rooms. Separate houses even.’ I say. ‘That’s the power of a good pillow barrier,’ he says, and his voice has a smile in it.”

The romance was swoony and complicated and warmed my heart. ➽ There are so many things I like about the romance, as it hit a lot of amazing tropes. I mean there is the bed-sharing trope in full force (😉) as well as some great opposites attracts as Alex and Natalie couldn’t be more different. Alex is Zach’s oldest brother (another spicy fact that stirs up some difficulties and drama) and an aspiring chef who often feels like he’s not good enough to please his family, especially with Zach’s own accomplishments. He’s also way more outgoing and extroverted than Natalie, who doesn’t like parties and isn’t appearing as confident. Nevertheless, Alex is a good guy who respects Natalie and grew up with a mother who thought that it was important to teach her sons how to respect women (Alex and Zach’s mom is the best). Their banter is off the charts flirty, swoony and funny! You can see the instant chemistry that both of them have, a way of being together despite their differences and a dedication to making it work against the odds. Natalie herself has no dating experience unlike Alex and still struggles with the aftermath of her acne, so there is some insecurity, fear to open herself to other people and a few rough patches in general in their romance. However, I still loved their emotional Arc and the hope to make it work, as both clearly cared about each other 🥺💕

“‘Okay, tell me your top five tips,’ I say, suddenly realizing Alex is going to be here any minute.
‘I’m not a BuzzFeed article.’
‘Quick, just tell me the most important things.’
#friendshipgoals“

I also loved the friendships! ➽ I especially loved the friendship between Natalie and Lucy, as I’m all here for strong female friendships. Even though Natalie sometimes struggles with Lucy having more dating and sexual experience, she never looks down other because of that and both girls embrace their differences. (It’s refreshing to have a book with no subtle slut-shaming). Lucy herself is a caring, loyal friend who is popular but genuinely nice and interested in Natalie, despite having a large friend group. She’s also under a lot of pressure to be perfect and become a lawyer by her mother and trying to do her best. I could relate to her inherent need to make the best of every situation and try to smooth over the waves of tension that arose. I always strive to maintain harmony as well. Natalie’s second, best friend is Zach, who I struggled with a bit more as he said a lot of mean things that hurt her in the middle, but later you get the reason why and that he was only worried his friend would get hurt. Despite their differences, Natalie and Zach have great banter between them and are very close. Another thing, that was discussed was the fact that Zach and Lucy are dating … leaving Natalie feeling insecure at times, like she’s the third wheel. I loved that both her friends tried to make her feel included, but yet I also appreciated the discussion about how awkward having your two best friends date could be (and how sometimes jealousy and ugly thoughts arise) and how it’s difficult to find a medium between letting them have some date time and also doing things as a friend group.

“I always had this vision of myself doing something important during my teen years. I didn’t think I would be a child prodigy, but I thought I would be something very close to it, and now I’m almost out of time. Before I know it, I’ll be twenty-one and no one will be impressed by anything I do.”

In general, the book was amazing as it addressed a lot of important topics ➽ I always appreciate stories that don’t shy away from discussing difficult topics but also don’t make it sound preachy or forced. The way that the book incorporated talking about heteronormativity (even asexuality was mentioned, something that sadly doesn’t find notice in a lot of books), feminism, safe sex and feeling uncomfortable with your body was amazing. It was done in a subtle way that felt very real and relevant. Natalia struggles a lot with her body image (part of it because of her acne) and the question of if there’s something wrong with the way her body looks or if it’s supposed to look a certain way. Her worries felt real and I honestly haven’t read a book that is so open about the more ‘taboo’ topics that often don’t get touched upon. Everything about It Sounded Better in my Head feels honest and like the author understands what it’s like to be a teenager.

IN CONCLUSION. ➽ It Sounded Better in my Head was simply amazing. It had everything that I could have asked for: a super relatable, awkward main character struggling with her own fears and insecurities as well as a swoony, banter-filled romance and a lot of great friendships. This book just gets it and made me feel so understood 💖

Are you going to read It Sounded Better in my Head? What was the last book you read with a super relatable main character? 💗

8 thoughts on “Arc Review: It Sounded Better in my Head by Nina Kenwood 💗 A surprise favorite!”