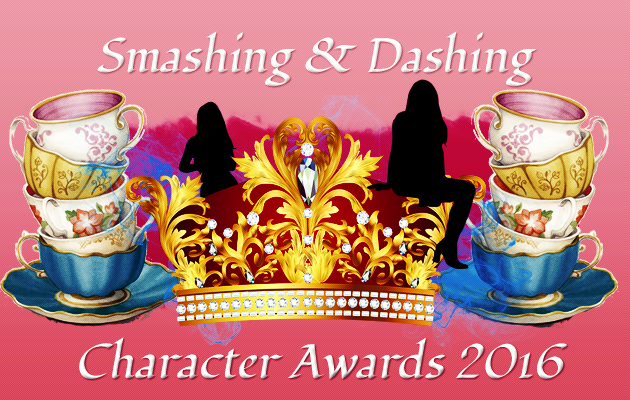 Hello fellow bookworms 🏆 It’s time for me to name my favorite characters of the year, because 2016 is already over. Thank you Cait (Paper Fury) for inventing this really cool tag that helped me a lot to group my favorites into handy categories, I had lots of fun writing this ♥ I’ve only added one category which is Annoyed the Hell out of me, because I had quite a few characters this year that weren’t really boring, but rather annoying.

🏆 Newt Scamander (Fantastic Beasts) because he too is awkward, doesn’t like to deal with the humans, loves animals and is a little harmless cinnamon roll. I honestly have never encountered a character that I related more too. Now we’ve also revived #HufflepuffPride which I’m super grateful for, because it’s the most underrated house. Not only is Newt now also one of my favorite characters of all time, I also love him so so much, he must be protected! I might be a little obsessed with him …

🏆 Colton (Timekeeper) because I couldn’t think of an animal companion (which is really sad – where are all the cute animals in the books I’ve read??) so non-human was the closest call. Colton is a clock spirit aka non human and too precious for this world, he’s the purest cinnamon roll. Another character that has to be protected!

🏆 Safiya & Iseult (Truthwitch) 🏆 Nessa (The Call) because Safiya + Iseult are the perfect power duo, balancing each other out and working together so well in combat. They combine different strengths and have learned to rely on each other in a fight. I was all here for my two really badass fighters ♥ Nessa is also a fierce fighter, because she trains to survive a call into a murdery fairy land, where 9 in 10 people die. Her legs are twisted because of polio and still she does not give up, but relies on her other strengths and her determination to survive.

🏆 Jules (Three Dark Crowns) because it had to be her, she is super amazing and strong. She definitely is the best sidekick you could ask for, because she’s not letting anything get her down and is quite powerful herself. However, Jules is also loving and loyal to the end and helps her best friend (one of the main characters) at every turn. Words cannot begin to describe how much I like her strength of character and bravery.

One you’re surprised you loved

🏆 Violet Lasting (The Jewel) because I originally had thought that she would be another protagonist that made unreflected choices. However, Violet was quite kind and for the most time very friendly towards other characters. She also made no naive decisions and acted rather smart, not being one of the characters that purposely rebels at every time against someone much stronger. I really liked her for that!

🏆 Magnus’s Sword Jack 🏆 Roth (White Hot Kiss) 🏆 Aeduan (Truthwitch) because I’m obsessed with sassy characters, they are the best. Magnus’s sword is super funny and sassy, I mean it’s a talking sword that occasionally sings and recounts fun times with his former owner, what could be better than that? Roth also has all the sass and likes to tease the main character, which is why immediately took a liking in him, he’s a fun guy to be around. Aeduan – my son – is also the sassmaster and has 0 patience for annoying people that get in his way. He one time hissed at someone that he would get them at drag them to the void (the fantasy world’s hell) #classy

🏆 Roth (White Hot Kiss) 🏆 Aeduan (Truthwitch) because the other thing I’m obsessed with are morally gray characters, they are usually my faves with very few exceptions. Roth is demon so basically one of the bad guys, but still he’s helpful and charming to the main character and not so bad like anybody thought. Aeduan is a Bloodwitch aka “evil” witch which is associated with the void/hell, he also likes to sneer at people and kill them, but he’s also got some kind of honor and is not as bad as anybody thinks.

🏆 The Commandant (An Ember in the Ashes) because this one (I think) is not about villains I don’t like but rather about not so great villains to hate. Therefore The Commandant is a very good pick. because she’s a rather flat villain that not at all frightened me. Sure she is sadistic and cruel, but there’s no real wit to her and she spends rather much time condemning the fact that she’s a woman. I just wasn’t impressed with her as a villain.

🏆 Amber’s Mum (How Hard Can Love Be?) 🏆 Adams’ parents (The Raven Cycle) because there are too many bad YA parents, it’s a serious problem. First off we’ve got Amber’s mum who I never really liked, since she left her daughter alone with a new stepmum/brother that made her life hell and never contacted her ever again while living her dream life in America. I understand that she was recovering from being an alcoholic and losing a child but pushing her other daughter away and not being straightforward with her? Not cool. The next family is no big surprise since Adam faces domestic violence, so there’s no further explanation needed as to why his parents are the worst.

🏆 Apollo (The Hidden Oracle) 🏆 Arsinoe’s Family (Three Dark Crowns) because sadly there are so very few of them, since mostly YA parents are either dead or not great. Apollo might be not an obvious choice, but he changed so much in The Hidden Oracle when he was turned into a human and finally saw his demigod children from a closer perspective. He started to care so much more about them and build a connection because finally he was close to them. Arsinoe’s family (aka the people that raised and supported her) is also really loving and she’s got the best support out of all the queens, which makes a difference, since she grew up loved. I really want her to win.

Toot Toot Best Ship of them all

🏆  Sara/Julian (Red Queen) 🏆 Roth/Layla (White Hot Kiss) 🏆 Aeduan/Leopold/Iseult (Truthwitch) 🏆 Annith/Balthazar (Mortal Heart) 🏆 Sybella/Beast (Dark Triumph) 🏆 Pynch (The Raven Cycle)🏆 Safiya/Merik (Truthwitch) because you cannot make me choose so I’m naming my favorite ones of the year. I’m pleased to see how many are canon or near canon.

The Most in need of protection

🏆 Eris Dodd-Radson (The Thousandth Floor) because even though there are so many characters in need of protection Eris needs it the most since she is surrounded by vicious manipulative rich people, especially since she no longer belongs to them. She’s a precious cinnamon bun with great character development. She’s the characters that just DIDN’T deserve it.

Most Boring as a Barnacle

🏆 All Characters (especially Laia) from An Ember in the Ashes because I was searching for some complexity in the entire cast of characters but didn’t find it. Never have I ever meet characters that are so boring and one-dimensional. I don’t get why anybody would consider them strong characters, when they literally have no personality? I’m already in the minority, because everyone loves the books while I just don’t. I especially think Laia is a weak character in terms that she shows no emotions to death and tradegy. The rest of the book she keeps telling anybody that “she’s not as strong as her mother” but still manages the impossible, which makes no sense at all.

🏆 Katharine (Three Dark Crowns) because this one was actually hard but then I remembered who would be perfect for this category: Katharine. She’s with the poisoners and under harsh conditions, which is beginning to turn her into a darker queen. She’s my second favorite queen to win the tournament. I’m just saying one thing about her: “I want revenge. And then I want my crown”

🏆 Dr. John Dee (The Necromancer) because after failing multiple times to catch the heroes for his master, he’s now basically hunted by everyone. Still he managed to escape them and trick the heroes. It’s a miracle that he’s not be caught and executed on spot by his former evil master and his minions. I’m quite impressed with his escaping + being evil despite being the most wanted skills.

🏆 Mare Barrow (Glass Sword) because it’s an integral part of her character and a reason why I love her so much. Mare is trying her best, but her decisions are not always for the best, which makes her so realistic in my opinion. Finally a teenager in a YA dystopian that does not act perfectly under pressure (which is just not realistic) but breaks a little and still tries to hold herself up.

🏆 Magnus Chase (The Sword of Summer) because he’s the hugest dork, funny and really likable. I quite relate to him from time to time, because he’s just so realistic and true and reacts like I would in many situations. He’s honestly one of my favorite YA protagonists and never fails to make me laugh which is why his book series is the most hilarious of all Rick Riordan’s series!

🏆 Diana Farley (Red Queen) 🏆 Ismae/Sybella/Annith (His Fair Assassin) because Farley is seriously one of the best leaders. She’s very smart, cool under pressure and always knows a way out. She does trick her own father when he’s trying to take the rebellion from her and steals his aircraft’s, which shows her cleverness. She also build up the rebellion carefully for a long time. Ismae + Sybella + Annith are all very clever in their own ways and in the end succeed, even against the shady Abbess of the convent where they were trained. All the girls are also incredibly competent, determined and you should not mess with them.

Most in need of a nap

🏆 Cal Calore (Red Queen) 🏆 Khalid (The Wrath and the Dawn) because even though literally every character badly needs a nap and a blanket draped around them, those two did go through some bad shit. Cal especially needs this at the end of Red Queen and throughout Glass Sword, because stuff goes down and he’s surrounded by people that don’t trust his likes, while battling with what he’s done and trying to hold on. He really is precious and flawed at the same time, I think a nap would really do him well. Khalid quite literally needs a nap for obvious reasons, especially with everything that he had to deal with for such a long time. Just let him nap!

Want to read more about

🏆 Ronan Lynch (The Raven Cycle) 🏆 Aeduan (Truthwitch) because I always fall in love with the characters that need to get more screen time in the book. Happily there will be a Ronan Trilogy so many prayers have been heard, even though it will still be a very long time until publication, but nevertheless I’m very excited! Aeduan already is my sassy fave, so he needs more screen time, because there’s not enough of him at all. Where’s the book called “Bloodwitch”?

What are your favorite characters of 2016?🏆